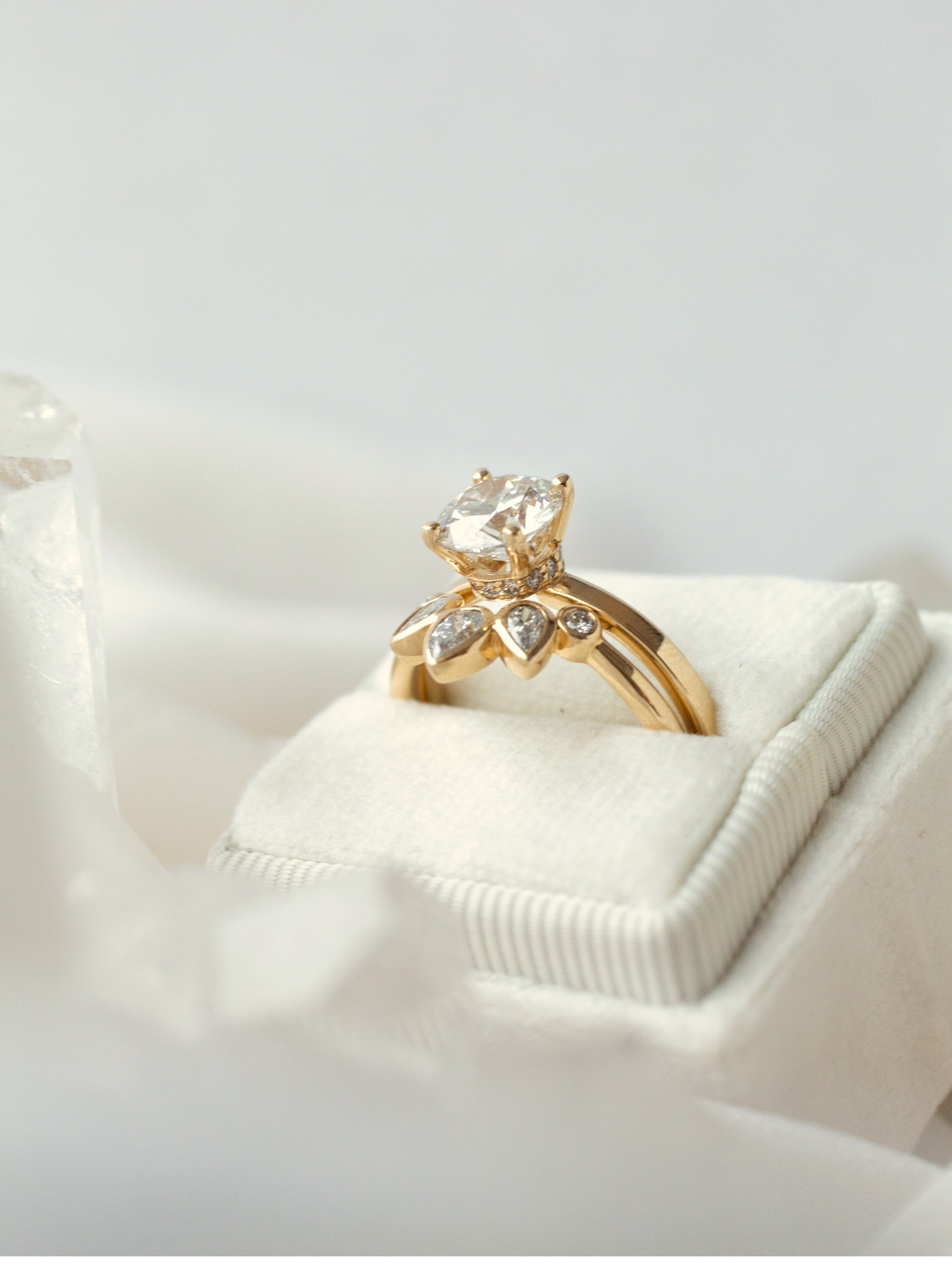 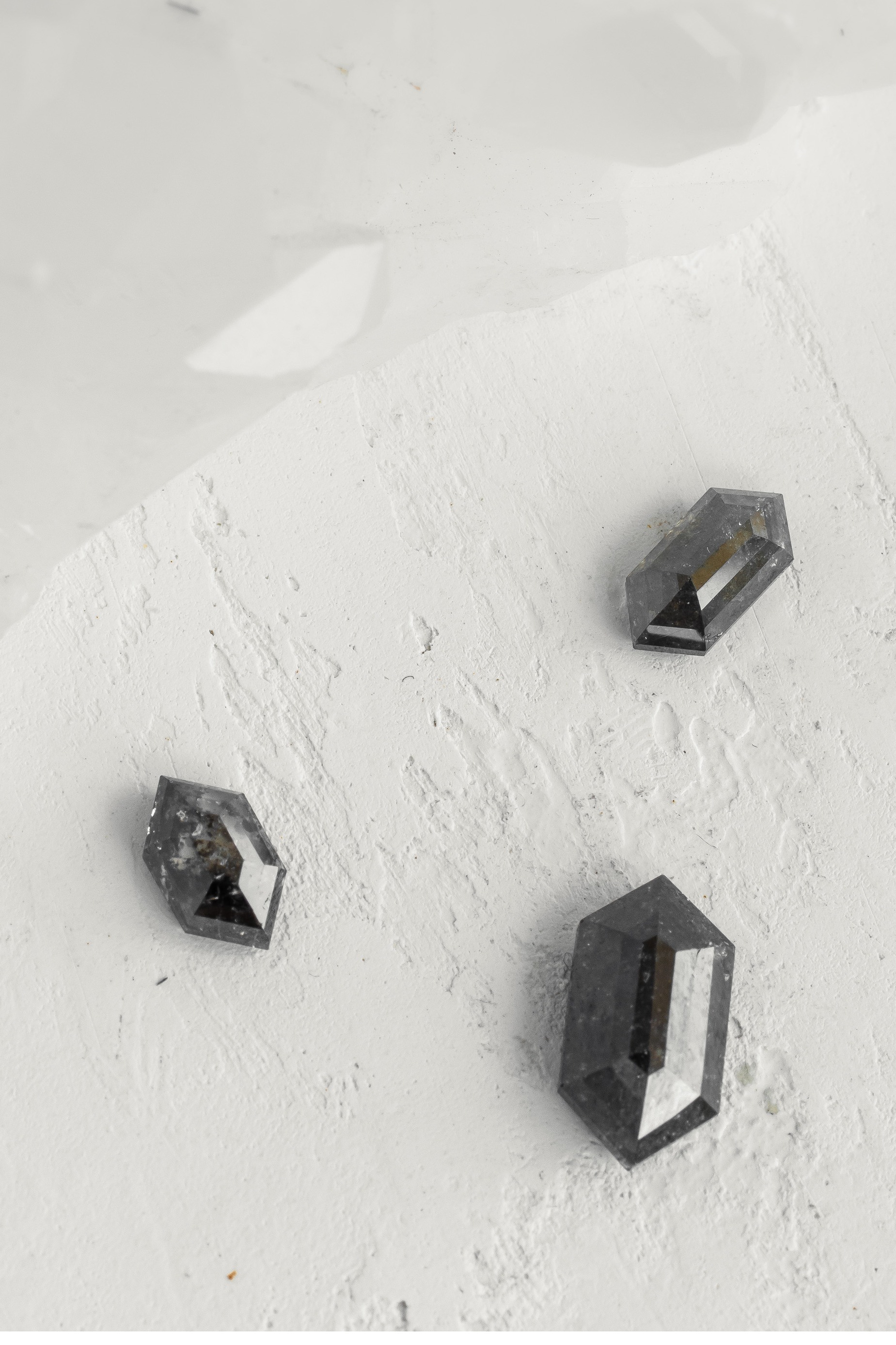 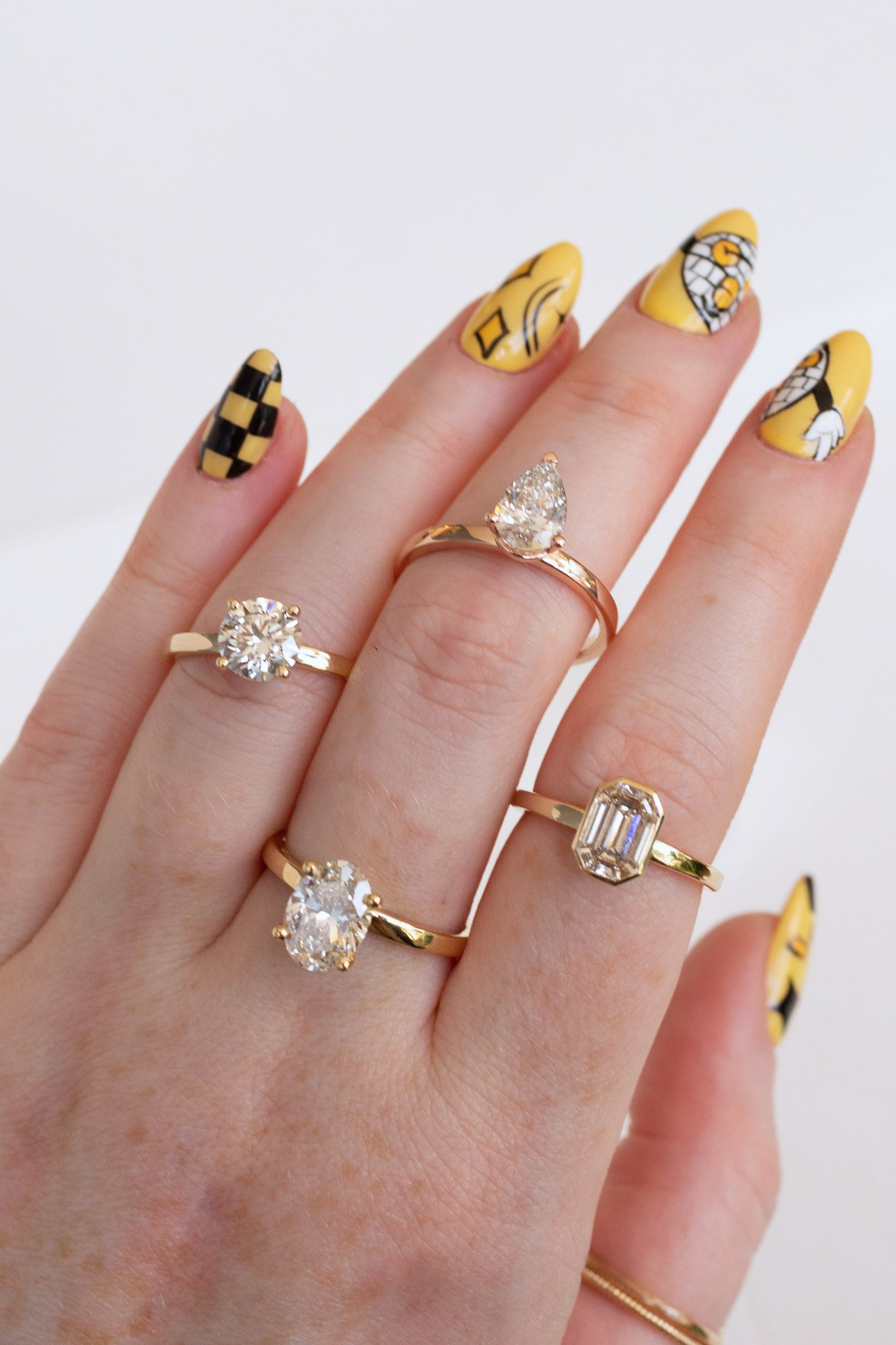 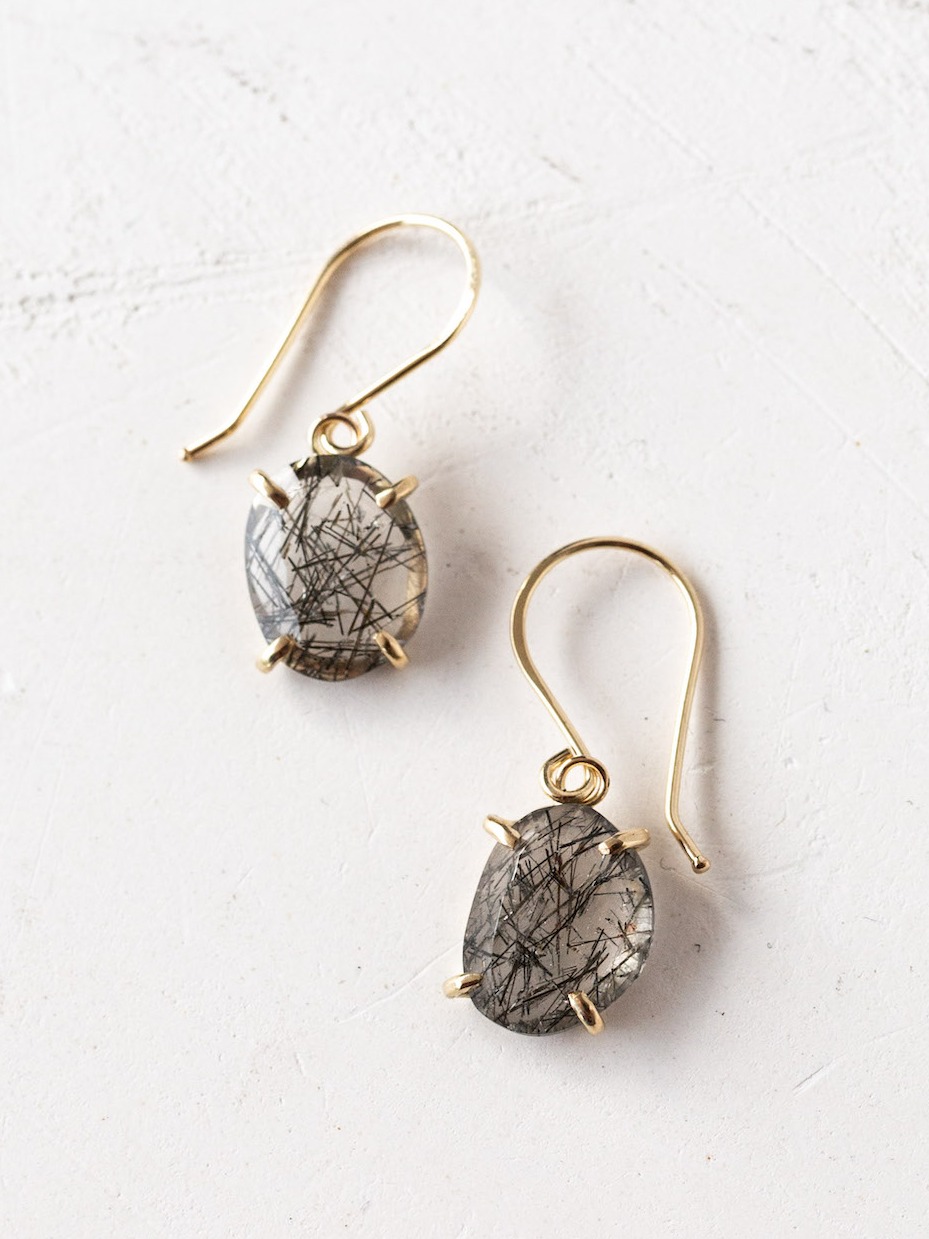 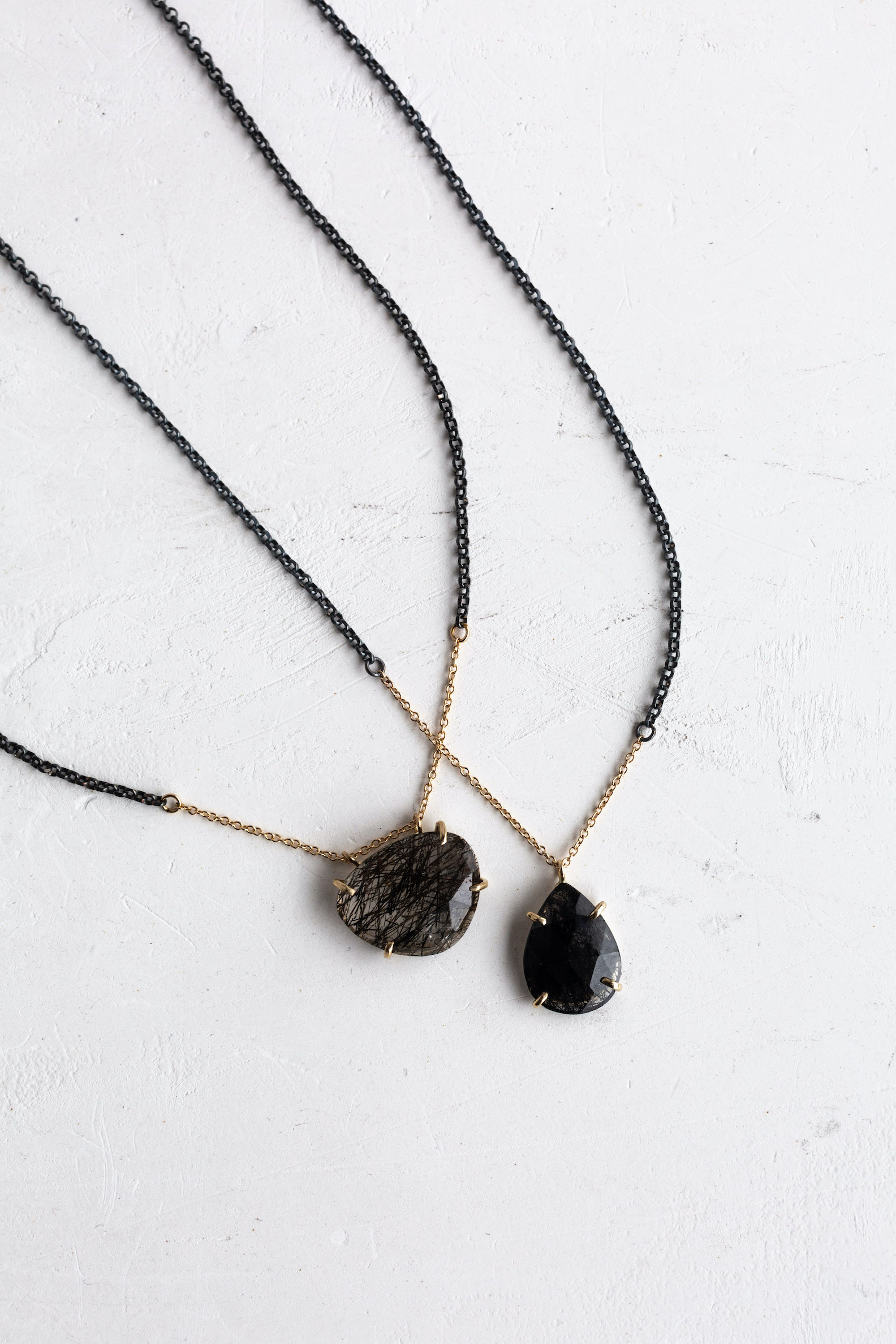 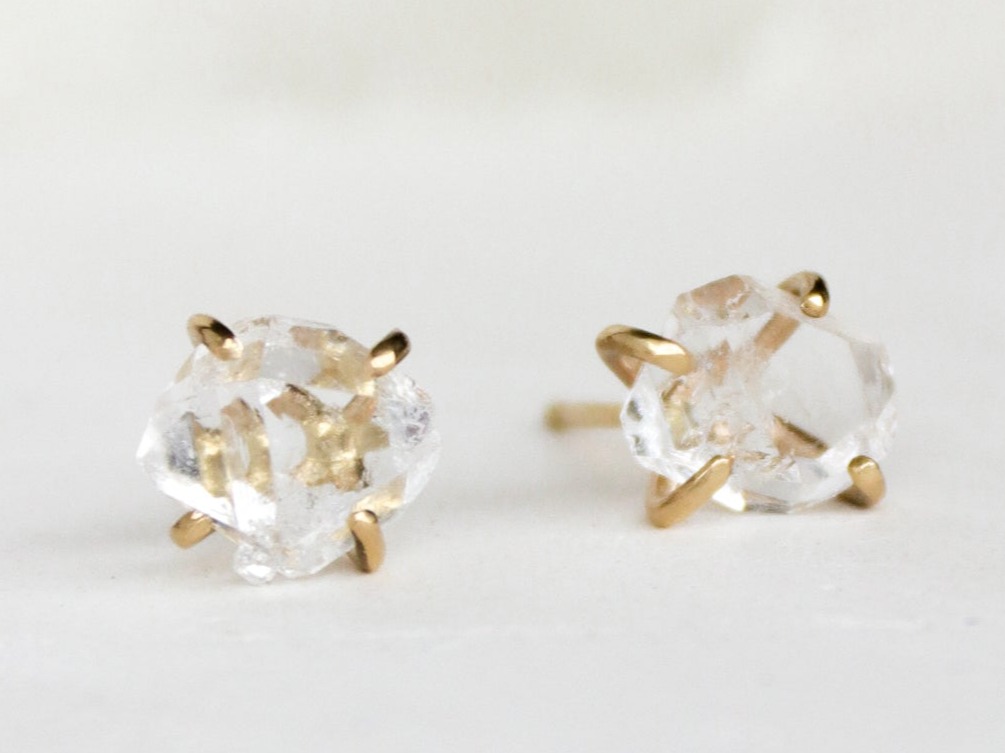 April’s birthstone is the diamond, but you aren’t limited to just one variety. Other transparent gems like quartz are just as beautiful and fascinating to behold, with character and beauty few experience. Why limit yourself to what’s expected of you? Expand your horizons with other unique gemstones with as much charm and beauty as the standard flawless diamond.

Our monthly Elements Collection is all about contrast with oxidized silver and 14k yellow gold, highlighted with each of the glittering stones discussed here. 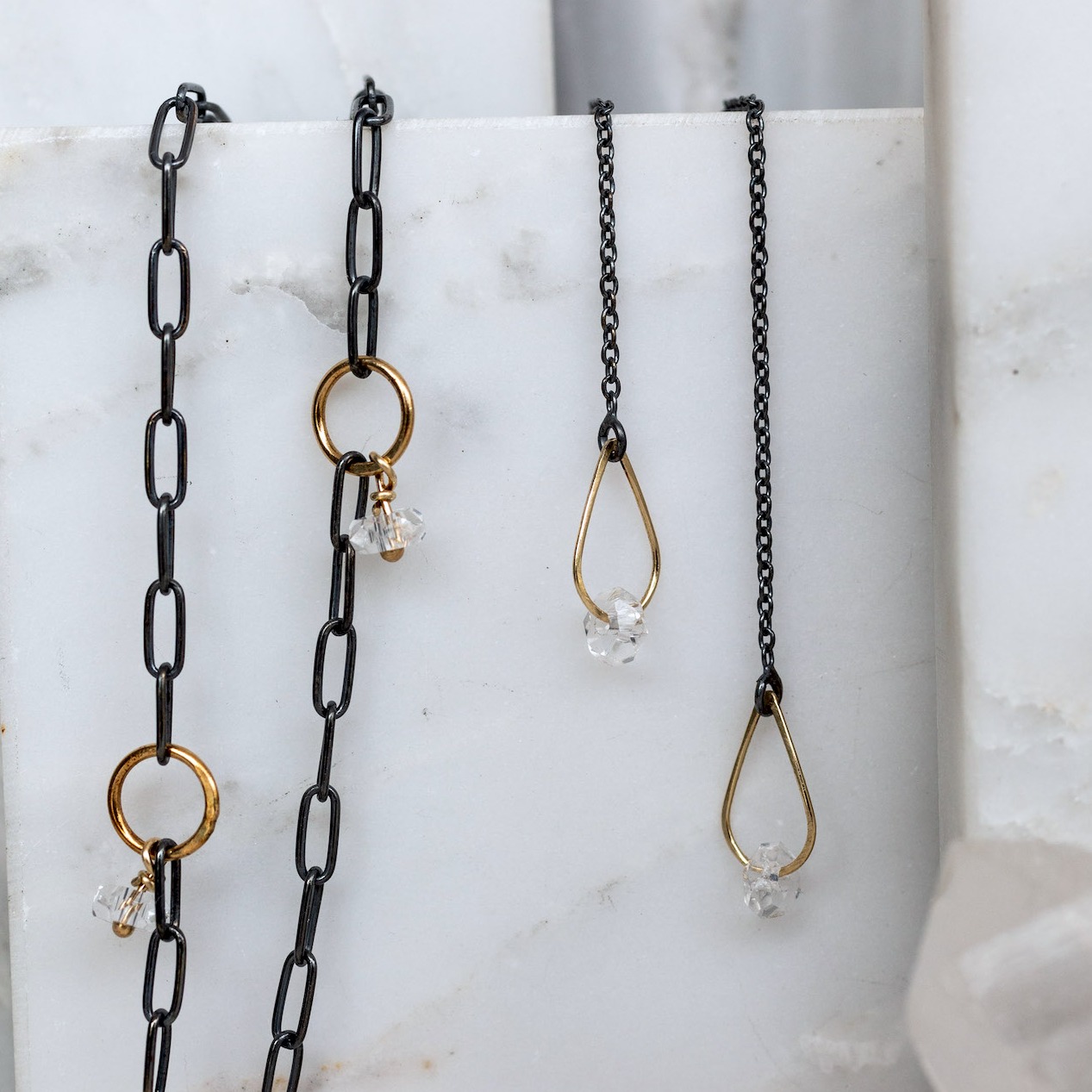 Made of transparent, structured carbon, diamonds come in more than one color, though we hear mostly about flawless transparent ones. But did you know that there’s a lot more to diamonds?

The first recorded description of diamonds comes from the 4th century BC in India. It’s estimated that these diamond deposits formed over 900 million years ago — that’s a long wait for beauty! Unlike their use in jewelry and decoration now, diamonds were initially sought after for their strength and light refraction.

Ancient peoples used diamonds as engraving and cutting tools, adornments, and talismans for warding off evil. Ancient peoples believed that ingesting them would heal physical wounds, like cuts. For centuries, most thought that India was the only location where you could find diamonds naturally.

A diamond deposit was found in Brazil in 1725, but it was relatively small and failed to provide enough for global demand once the Indian deposits ran out. In 1866, a 15-year old boy named Erasmus Jacobs found a 21.25-carat diamond while playing along the banks of Orange River, South Africa — though this lucky boy at first believed it to be a simple pebble.

Increasing numbers of diamonds were unearthed over the years. So much so that royal and noble families saw them as no more appealing than a plain colored gemstone. Mining companies provided more diamonds than anyone wanted for decades, and it once seemed as if demand for this stone would disappear.

Then, in 1937, the American diamond market boomed again. A British diamond mining company called DeBeers launched a Hollywood ad campaign featuring several of the most popular celebrities at the time endorsing their product, accompanied by the phrase “a diamond is forever.” Many believe that this phrase caused diamonds to become so heavily associated with marriage and engagement rings.

Tourmaline covers a wide range of boron silicate minerals, while quartz is composed of silicon and oxygen arranged in a crystalline structure. Tourmalated quartz refers to the fusion of these two gems in a distinct pattern. Tourmalated quartz occurs naturally and is semi-transparent. The quartz contains needles and spires of black tourmaline in intricate patterns of sheer beauty. It is formed when extreme heat and pressure meld tourmaline and quartz into one stone. After cooling, the two separate somewhat to create striking patterns.

Linguists believe “quartz” comes from the Czech word Tvrdy, which means hard. Tourmaline comes from the Danish word Turmali. It is thought that the first uses of this stone date back to roughly 2 million years ago in Ethiopia, where they were used as cutting tools. Geologists found what they believe to be evidence of this in Omo Valley. It makes sense that humans would use quartz for cutting, as it is a very respectable 7 on the Mohs hardness scale. Standard diamonds rate 10 on the scale, which measures gemstone hardness from 1-10. 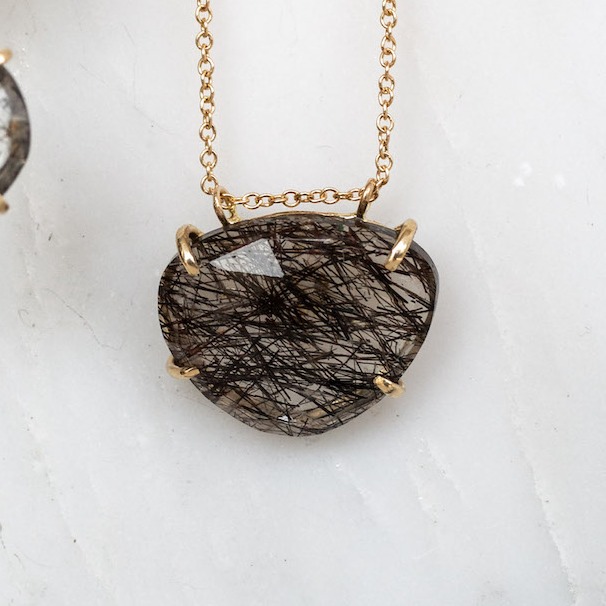 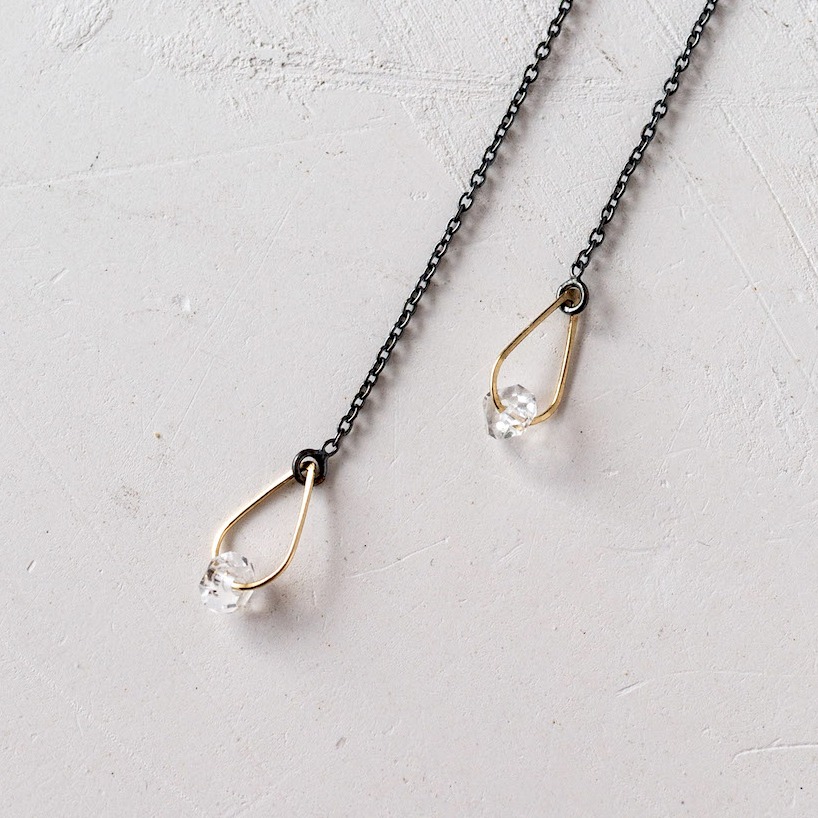 While actually made of quartz, their brilliance and transparency have led to people referring to them as diamonds. Quartz is the most abundant mineral in the earth’s crust, making it popular for jewelry as well as many industrial uses.

Herkimer diamonds are sometimes called the gemstone of high vibrational light. This kind of quartz is believed to powerfully amplify energy due to having a regular hexagonal crystal structure. Some people say that Herkimer quartz can aid spiritual practices by forming astral connections, amplifying attunement, and providing situational clarity.

These quartz “diamonds” are extra special because of their double termination — a natural point at both ends. Herkimer diamonds were first widely discovered in the late 18th century by workmen in the Mohawk River Valley. This led to geologists finding large quantities of these gems growing in exposed dolomite, which they mined and gave the name “Herkimer diamond” after the gem-rich site in Herkimer, New York.

While this type of quartz can be found in other places, only gems from Herkimer county, New York, are known as “Herkimer Diamonds.” New York is one of the most common sources, and that’s where we prefer to get ours. There’s even a Herkimer diamond mining campground that you can visit. They allow people looking for their own stones to mine for them, and even if you don’t find anything, it’s still a once-in-a-lifetime experience.

Whether or not you believe in the healing energies of diamonds and quartz, these stones undeniably make beautiful jewelry and engagement rings. They’re an especially fitting gift for loved ones born in April or a way to treat yourself just for fun. Shop the Elements Collection each month for new releases of our limited edition collection inspired by birthstones.

Sending love and warmth this season.